My life, My style, My world.

There is always that one person you work with that either doesn’t know what is expected of them, or they just plain lack common sense. DO NOT BE THAT PERSON! No one wants to work with you if you are constantly needed to be told to do something.

Do not be lazy.

Its your job, you are getting paid to work there so they expect you to work. Don’t just stand around and talk to other employees which distracts them from doing what they are supposed to do. If you really do not want to be there, find a different job! Aint nobody got time for that! If your not working hard or wanting to get the job done, chances are other people and customers can tell and can really bring down a business as a whole.

Do not be a bossy boots. If you can’t get up the energy or want to do a task DO NOT DELEGATE IT TO ANOTHER ASSOCIATE. For the love of God, just do it yourself!  Just because you don’t want to do it, don’t push it another person who is doing what they are supposed to and they don’t need double the work load just because you don’t feel like it.

Take responsibility for your actions.

If you do something wrong, own up to it, don’t pretend that you didn’t do it. Even worse than that, if someone brings up something that hasn’t been getting done in a meeting and you are guilty of it, don’t try to cover it up by agreeing with the person who brought it up. Man up, and be an adult by it and just change it for the future.

Do things right the first time. 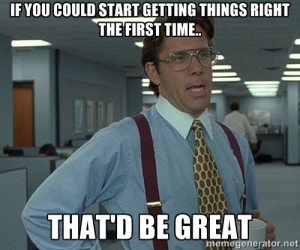 Do you know how many times I have had to completely redo a fixture or table or rack of clothes because the original person who did it in the first place just diddledicked around and did it half ass. Lets just say if I had a
dollar every time this happened to me, I would be the next Steve Jobs and I would open up my own store and only hire professionals and would do an extensive screening process for everyone I interview with another round for the Potential new hires. I have definitely gone a little of track… ANYWAY, Do it right the first time, yes it might take a tad bit longer, but saves soooo much time  in the long run for everybody else who you work with!

I have worked with so many dunderheads in my life as a retail worker and I have learned that there will always be that one person, the one person you want to just yell and or cause a scene with, but you have to hold it in and keep pushing. Don’t get me wrong I absolutely love my job, But some people need a little push and I hope this post helped one, lets say, Work ethically declined, person and opened them up to at least try a bit harder and actually work for the money they are making… Well at least try.